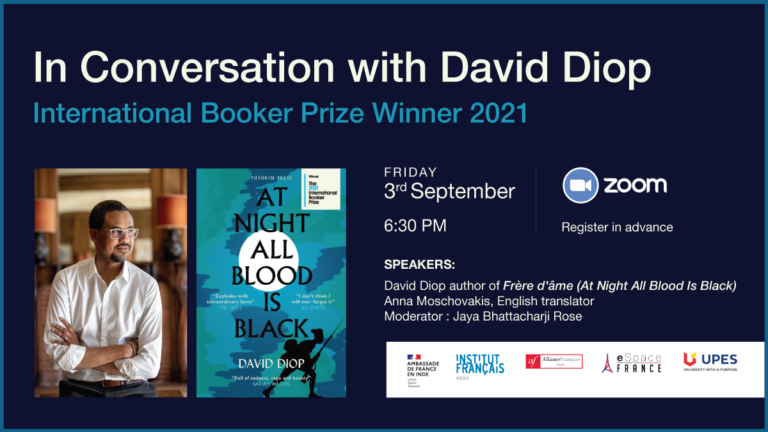 Join us for a digital talk with the French author David Diop who will be in conversation with his English translator Anna Moschovakis on his book Frère d’âme [ English version – At Night All Blood Is Black ] which won the International Booker Prize 2021. The book is a historical war novel that depicts Senegalese Tirailleurs who fought during World War I. At its heart, it is the story of the friendship of two young African peasants, drawn into an industrial war so violent that it disorients them, dislocates them from their own identities, and forces them to set off on a search for their lost humanity.

The discussion will be moderated by Jaya Bhattacharji Rose [ Ace Literary Consulting & Associate Professor (School of Modern Media Studies, UPES) ]. The conversation will be followed by a Q & A session with the audience. Frère d’âme will soon be published in Malayalam by DC Books with the support of the French Institute in India‘s Publication Assistance Programme (PAP Tagore).

David Diop was born in 1966 in Paris. He grew up in Senegal and then returned to France for his higher studies. He is now a lecturer on 18th century French literature at the University of Pau and the Adour Region. He manages an international research group on the European representations of Africa and Africans in the 17th and 18th centuries. This also irrigates his fictional accounts. His second novel, Frère d’âme, has been translated into more than twenty languages & was awarded the Goncourt Prize by high school students in France. The novel was also the recipient of the Goncourt Choice of Spain, the Orient Algeria, Slovenia, China, Tunisia, Serbia, and Brazil. He has just received the prestigious International Booker Prize in 2021. David’s new novel, La Porte du voyage sans retour, will be published on August 19, 2021.