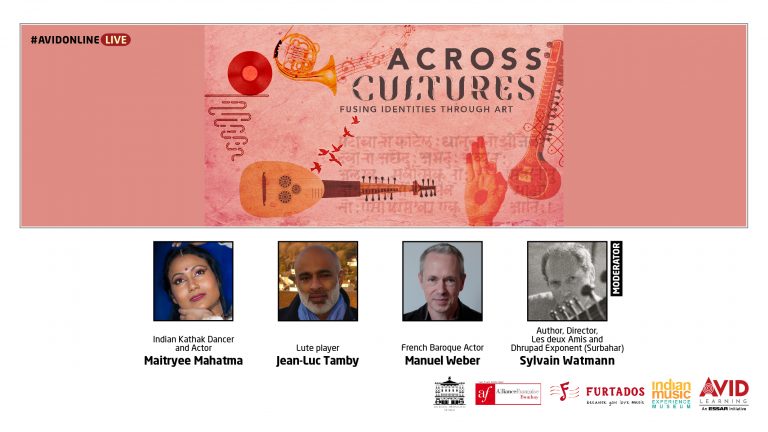 Join us at 6 pm on Oct 21 for the virtual panel discussion Across Cultures: Fusing Identities Through Art featuring Author & Director of Les deux amis and Dhrupad Exponent (Surbahar) Sylvain Watmann who will moderate the session and be in conversation with Indian Kathak Dancer and Actor Maitryee Mahatma, Lute player Jean-Luc Tamby and French Baroque Actor Manuel Weber.

The speakers will delve into their work in Les deux amis (i.e. “The Two Friends”) – a French play which stages the imaginary meeting of French fables writer La Fontaine with Pilpay, the legendary author of the Indian Panchatantra. The characters are embodied by a French Baroque actor and an Indian Kathak dancer holding a dialogue through their fables. The play is quintessentially an exploration of the space between mudras and baroque gestures, the space between baroque music and Indian alaps – a meeting of cultures, costumes, ideas, performance and art forms of India and France.

Join us for this extraordinary cross-cultural exchange, Across Cultures: Fusing Identities Through Art, as the fables spring to life, unveiling a surprising harmony between two distinct schools of art. The session includes a special live performance.

The panel-discussion is the second part of the lecture-demonstration series Across Cultures by Avid Learning which explores the potential of blending disparate art forms to create a new, artistically-curated holistic experience. The series attempts to answer the question – is fusion a scaffolding built to support the existing structure of an art, in a way glorifying it? Or does is dilute and eventually dissolve an art that posterity wouldn’t even know existed? This lecture is being brought to you in partnership with the Indian Music Experience Museum, Furtados, Royal Opera House (Mumbai) and Avid Learning.

Jean-Luc Tamby is a French lute player and musicologist with Tamil origins (his family comes from Pondicherry). He has studied classical guitar in the National Conservatoire of Paris, early instruments and early interpretation during master classes and private lessons, notably with Hopkinson Smith, Vincent Dumestre, Jordy Savall. He has toured in Europe and in many countries, mainly with le Poème Harmonique and has also been involved in many projects mixing improvisation, poetry, theatre, often with a cross cultural orientation. As a musicologist, he is interested in theories of improvisation, musical identities of minorities and cultural exchanges in the global world. He has published on these questions in France and in the U.S.A. He teaches guitar, lute and improvisation in the conservatoire of Rennes and musicology at the University of Rouen.

Born in Calcutta, Maitryee Mahatma has been training under Pandit Ashimbandhu Bhattacharya and Pandit Birju Maharaj, the acclaimed Kathak maestro; she has been performing on stage since the age of 10. Her dance style combines subtlety of expression with rhythmical virtuosity. A PhD in French literature too (University of Paris, 2008), she has been living in France since 2002, giving Kathak recitals throughout Europe, as well as multidisciplinary projects focusing on the meeting of cultures. Such is the case of Indalousie, a creation for dance and music from the Indian, Arab-Andalusian and Moorish traditions (Bonlieu, Annecy National Stage, Festival of Sacred Music of Sylvanès Abbey, 2010) and Rasa, with the Jhankar ensemble (Festival of Sacred Art, Vauvenargues 2010, Musée Guimet, Paris, 2011) among others. She has given Kathak workshops in (Lyon National Superior Conservatory of Music, 2011, UNIMAIL Geneva 2018) and gives talks about her art (France Culture, French national cultural radio, 2004). She lives in Marseille, where she fully participates in regional cultural life.

A graduate of ENSATT (Superior National School of Arts and Techniques of Theatre, France) Manuel Weber is an actor and stage director. He performs in numerous festivals in France and abroad. He studied Baroque theatre with Eugène Green and performed in his Mithridate production (Paris, Avignon), the film Le Pont des Arts and recorded Apollinaire’s Alcools (Alpha CD) with him. He gives conferences on Baroque declamation and gestures (Japan, the Luxemburg Philharmonic). He gave a series of readings of Mahabharata and Ramayana excerpts with Indian dance and singing. His interest for music led him to participate in projects such as La Fable du Monde (The Fable of the World) with Les Ombres ensemble (Saint Etienne Opera House, France 2013) and the recording of the audiobook Joan of Arc by Jordi Savall (Allia Vox). He staged and performed in Baroque works such as La Fontaine’s Adonis (Jean de La Fontaine Festival, Pontoise Baroque Festival, France), Molière’s L’amour médecin (created in 2013 at the Grenoble MC2 theater, France). He performed Accords mystère/corps volatiles, a theatrical and musical farce with texts by La Fontaine, with his company La Véloce (Jean de La Fontaine Festival, Lyon, Grenoble). He gives a theatre workshop at the New Sorbonne University in Paris.

Sylvain Watmann studied musicology, composition and guitar (1st prize in Excellence, 1999) in France and spent over 10 years in India traditionally learning ancient Dhrupad music with Pandit Pushpraj Koshti on Surbahar, Vedanta philosophy and Sanskrit. He has been teaching and performing Dhrupad (Academie-Bach Festival) since 2009.  His experiments led him to design a show associating Surbahar and French litterature with actress Anne-Guersande Ledoux, another associating Surbahar with Japanese Buto, with choreographer Béryl Breuil. He is the author and director of The two Friends (2017), a play about the historical influence of the Indian Panchatantra on French fables writer Jean de La Fontaine. His projects seek to bring present-day vibrancy and creativity together with the astonishing continuity of traditional arts.  He is presently  designing a documentary film exploring the life of classical musician Pushpraj Koshti in New-Bombay, and a theatrical project on poems by Yiddish writer Avrom Sutzkever.