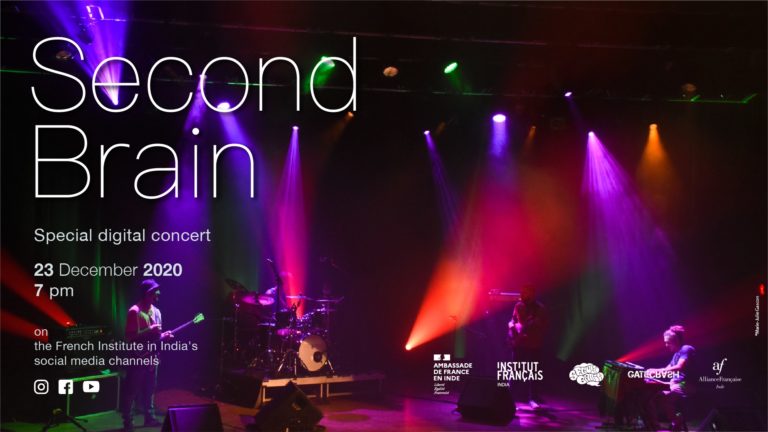 Second Brain ‘s soundscape is an amalgamation of Modern Music from the Early 20th Century and Progressive Rock from the 70s with strong Jazz and Funk influences. The group is the brainchild of the 26 year old French Composer and Guitarist Adrien Pigeat and was recently part of the lineup of the Kolkata Jazz Festival. Second Brain has been based in Reunion Island since 2017.  Join us for a special concert with them at 7 pm on December 23!

Initially formed in 2014 in South-West London, Second Brain ’s music comes out of the mind and soul of Adrien Pigeat who also worked with ZISKAKAN as a Guitar Player and the Music Director re-arranging music for the 40th Anniversary of the band with the 30 piece ensemble EMA Orkestra. Growing up in Reunion island with the influences of Maloya, African, and Indian rhythms; Adrien’s compositions are really eclectic. Ranging from Frank Zappa to Fela Kuti, this diversity shapes the unique colourful sound of Second Brain.

Digital Event courtesy of Second Brain, Gatecrash, the network of Alliances Françaises in India, the French Institute in India, and the Embassy of France in India