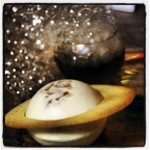 Conference by Christophe Lavelle : Science and cooking, from physico-bio-chemistry to culinary art

Molecular Gastronomy (MG) is a term coined in 1988 by hungarian physicist Nicholas Kurti and french chemist Hervé This in an attempt to lay the foundations for a new scientific discipline dedicated to studying the physical and chemical processes that occur in regular cooking (as done at home or in a restaurant). It pertains to the mechanisms behind the transformation of ingredients, but also to the social, artistic and technical components of food preparation and consumption. In the late 1990s, the term “molecular gastronomy” started to be used to describe a new style of cooking in which some chefs explored new possibilities in the kitchen by embracing scientific research, technological advances in equipment and various ingredients (mostly hydrocolloids) produced by the commercial food processing industry. However, this is obviously a misuse since MG was originally intended to refer only to the scientific investigation of cooking (i.e. to the production of knowledge), while as a technique, cooking is intended at the production of food. It was therefore proposed to call “molecular cooking” the new culinary trend that used new tools, ingredients and methods brought by molecular gastronomy researches.
During this conference, both molecular gastronomy (the scientific part) and cooking (the technological part) will be discussed. We will expose the origins and aims of MG and show how such an interdisciplinary scientific approach can indeed help better understand culinary phenomena, and ultimately influence the way of cooking.

Christophe Lavelle is a principal investigator at the CNRS (French National Scientific Research Agency) and co-head of the “Nuclear Architecture and Dynamics” scientific network (CNRS GDR 3536). His main studies concern the regulation of gene expression and the biophysical properties of cells. Passionate about food and the relationship between science and gastronomy, he teaches molecular gastronomy as well as biophysics and epigenetics in many French universities (Universities of Paris VI, Paris VII, Aix-Marseille, Lyon, Lille, Toulouse, SupBioTech Paris, Sciences Po Paris).

In partnership with IIT, TIFR, CBS University of Mumbai