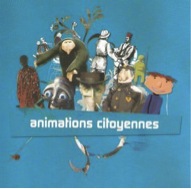 In partnership with Sakshi Gallery and French Embassy in India

The day to day life of a military world is disturbed by the appearance of a black kite behind its high walls.

A newcomer in fifth year in primary school. Tadeus comes from Chechnya and puzzles the other pupils. Will they accept him in their circle?

The life line of an imprisoned designer, in a work camp, brings people closer.

Learning to respect the environment.

After being cut down in the forest, a tree is taken to a factory where it will be chopped into little bits and transformed.

A l’époque…, by Nadine Buss

One of the rare cases of a German coming to France to seek refuge during the Liberation was my father. His biggest nightmare was that someone would find out his nationality…