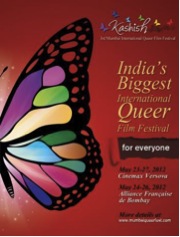 In partnership with Kashish

KASHISH Mumbai International Queer Film Festival is the first and only gay & lesbian film festival in India to be held in a mainstream theatre and the only queer festival to receive clearance from the Ministry of Information and Broadcasting. The festival is organized by Solaris Pictures and Bombay Dost in association with The Humsafar Trust.

KASHISH 2012’s theme is ‘FOR EVERYONE’. The festival is open for everyone and it is a FREE event.

There will also be a special package of French shorts with a diverse spectrum of LGBT films that include Plan Cul (Just For Sex), La Derade, Manhunt, Les Filles De Feu (Girls of Fire), The Incredible Adventures of Fusion Man and Un Autre Monde (An Other World).