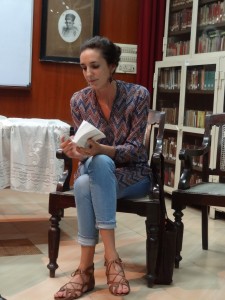 Laetitia Zecchini has authored the first scholarly study of the major Indian poet Arun Kolatkar (1932-2004). In Arun Kolatkar and Literary Modernism in India: Moving Lines, she contextualizes Kolatkar within the multiple cultural, literary and political situations that he inhabited and negotiated. She interrogates the received genealogies of modernism in India and ‘postcolonial literature’, by showing that Kolatkar and other poets of his generation embraced the American counterculture, the mediaeval Indic lineages of the saint poets and the European avant-gardes, simultaneously and with vibrancy. Laeticia Zecchini also reflects on Kolatkar’s bilingual literary practice, to demonstrate how he wrote in English and in Marathi, pushing both languages beyond their conventional boundaries, towards the Bambaiyya demotic in one case and American vernacular in the other.

The conference will be followed by a discussion with Ranjit Hoskote

In partnership with Kala Ghoda Festival