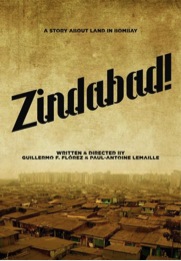 In partnership with The Root

Bombay wants to become a ‘world class city’. However, half the population lives in slums or on the streets in subhuman conditions. Then a battle for land begins between the authorities and Bombay’s poorest; a fight has intensified since 2004, when the government conducted an unprecedented wave of demolitions. Without land or scarcely even a roof to stay under, as well as the looming fear of deportation the poor organize themselves and demand their rights from the state. Zindabad! is the story of their struggle.