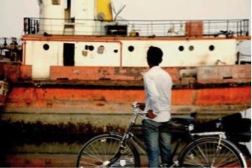 Music for (prepared) bicycles, a project by Caecilia Tripp

Following the exhibition at Clark House Initiative, this film will be screen at the Alliance. The global project consists of seven “prepared” bicycles in echo with “Music of change” by John Cage (1951) which will lead to seven sonic bicycle processions through seven different major cities. Each bicycle procession through the city is filmed. The bicycle wheels are strung with musical strings of an electric guitar, and playing cards are placed in between the spikes, provoking musical sounds as the bicycle is on the move. Beginning “Music for prepared bicycles” in Mumbai mingles further with John Cage’s entanglement with Indian philosophy and the act of civil disobedience initiated by Gandhi as an anarchistic means of change.

Q & A after the screening.