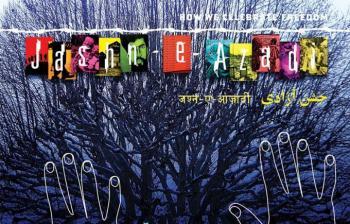 These stories have been told before. Yet Sanjay Kak s film on Jammu and Kashmir, Jashn-e-Azadi , documenting an innocent population trapped between the terrorist s gun and the army s, one gets gooseflesh and a sting in the eye. The film, shot from 2004-06 and literally meaning How we celebrate freedom. As the national flag is unfurled ritually, a handful of soldiers sing the national anthem while another handful guards them. The only other non-uniformed people present are the media. The rest of the place is barren and quiet. There are so many graves here, sometimes it s difficult to figure out which one is my son s, he says. Probably because his voice doesn t betray any tremor or because he says it so matter-of-factly, this scene hits the audience hard.

Another young man in the Kupwara district of north Kashmir says: My job is to bury the unclaimed bodies, it could be of a civilian or a terrorist. When I had started 10 years back, I was just 15 and used to be scared and shocked to see the mutilated bodies each day. But now…it s as if my heart has turned into stone, he says quietly. The camera goes through the twists and turns of lanes and catches a glimpse of the satirical farce created by Bhand folk performers in a village courtyard which is cheered by the crowd and then shows the outpatient wards of the psychiatric hospital of Srinagar where people pour out their fears to the visiting doctor. This is just one story of Kashmir, it definitely is not the story. The story of Kashmir has not even begun to be told, not by the media, not by anyone else, said Kak.

With beautiful yet sad couplets written by Kashmiri poets interspersed with shots of smiling tourists who call Kashmir a paradise on earth and grieving families, the 138-minute film sets the audience thinking. Perhaps, about what India s 60th year of independence really means to the people of Kashmir.