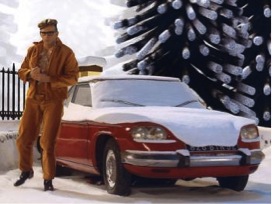 In partnership with Sakshi Gallery and the French Embassy in India

On the occasion of Art Thursdays, the Alliance Française de Bombay will screen Etrangement Courts, a series of French short films, in partnership with Sakshi Gallery, during a group exhibition.

Overtime, by Oury Atlan & Thibault Berland & Damien Ferrié
Small fabric puppets find their creator lying on his bench, dead. Our sad creatures don’t understand that he died, for they never had been confronted to such a concept, and will try to live as everyday.

Personne n’est parfait, by Christophe Clamaron
Zero 1 is an elitist cleaning robot. Every morning he arrives at work on time, checks in and says hello to the hostess. Then he goes to clean the director’s room. But in one moment an enormous stain appears on the floor!

StrictEternum, by Didier Fontan
A little house in the suburbs in the middle of nowhere. A car trapped in the snow. The great desperation of a couple who kill time in front of the television.

The end, by Martin Ruyant & Michel Samreth & Maxime Leduc
A scarecrow becomes friend with a bird. He becomes a traitor to others of his own kind.

Kitchen, by Alice Winocour
A young woman prepares a recipe for American-style lobster, which calls for cutting the live lobster into pieces, before throwing it, still alive, into boiling oil.